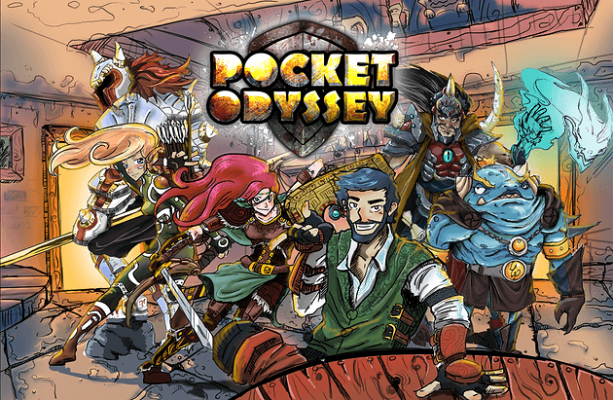 Pocket Odyssey is a micro dungeon crawling game inspired by traditional tabletop RPG games. It takes place in the Dungeonfell, also known as the buried plane, with all but one player acting as a group of adventurers on a quest. The quest is created by the last player, known as the storyteller, who must create a set of challenges based off of quest cards randomly drawn at the start of the game.

The game concept can be described as putting the spirit of a traditional pen and paper RPG into a micro table top game. Players pick a character background card (ex: Ogre Slayer, Swindler King, etc.) and add special power cards to them (ex: Fireball, Backstab, etc.) they then draw a Flaw card which gives them a unique attribute (ex: chronic liar, Impatient, etc.) and a personal goal card (in secret) which they must complete in addition to the main quest to win the game (ex: Outsmart an enemy, Betray a party member, etc.).

During combat the game is played on modular map cards with heroes and monsters acting in sequence; the storyteller controls all the monsters. Heroes obtain loot cards at the end of combat in addition to leveling their characters stats. To win the game, each player must complete the main quest developed by the storyteller (through the use of the quest cards) as well as their own personal quest cards (which are kept hidden until completed).