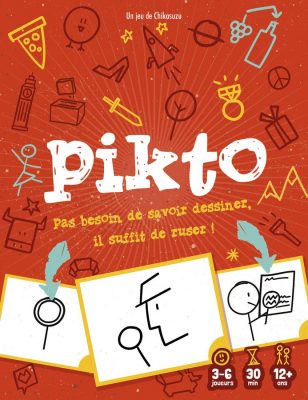 In Pikto, you want to draw pictures so that whoever is guessing this round might be able to identify your drawing — but will you go for a simple image that the guesser might have first crack at (and miss), or a more detailed image that might have you waiting to see whether someone else’s image is guessed first?

In more detail, each player receives a dry-erase board and a pen. One player is the guesser for the round, and they step away from the table or hide their eyes while everyone else draws a word or phrase. To choose what to draw, roll the twelve-sided die, then consult the appropriate number on the card that you drew. (The box has 46 double-sided cards, with twelve words/phrases on each side, or 1104 total answers.) Show everyone but the guesser the word to be drawn.

After everyone has been guesser one or two times, depending on the number of players, the game ends and whoever has the most points wins!