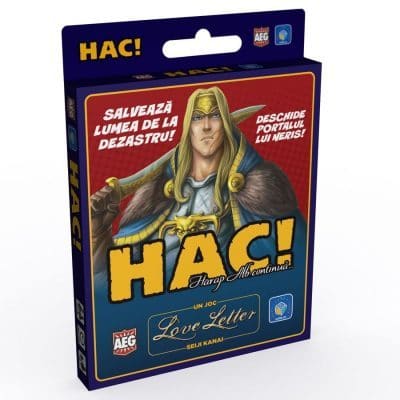 Neris the goddess has left Earth a long time ago and quickly after forces of evil have started fighting for power over all mortals. Can Harap Alb, our last hope, collect the magical gems needed to open the portal that can bring Neris back? With the help of his friends, who all have super powers, he heads into battle against gods, sorcerers and other supernatural creatures.

Harap Alb continuă… is based on the mechanics of Love Story, but its action is placed in a whole other universe and the characters are borrowed from one of the most popular Romanian stories of all times: the story of Harap Alb, the youngest son of a small ruler who proves to be smart, strong, and fearless.

Players start with only one card in their hand, drawn from a deck of sixteen cards. In each turn, a player draws another card from the draw pile – containing the cards that have not been dealt, and then plays one of the two cards from his hand, trying to expose his enemies and knock them from the game. Will you rely on powerful cards and jump right into battle, or are you building a plot using the weaker cards? But more importantly, do you have what it takes to help Harap Alb open the portal for the goddess Neris?