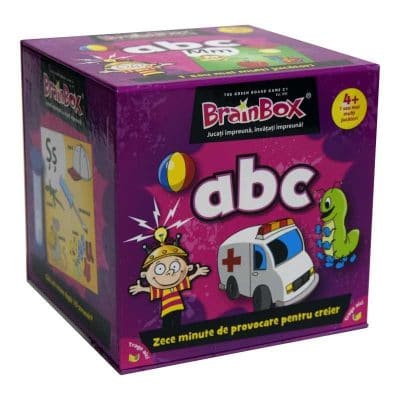 The object of the game is to win as many cards as possible in ten minutes. The first player takes a card from the Brainbox and turns the timer over. The player then has ten seconds to study the picture on the card. When the timer runs out the card is passed to player two and player one rolls the die to see which question is to be asked. The questions are on the reverse of the picture card. Player Two checks the answer by looking at the picture and if it is correct the card is given back to Player One to keep. If the answer is wrong the card is placed back into the Brainbox and the next player chooses a card. Please remember, the answer to the question is on the picture side of the card, so look carefully! The player with the most cards after ten minutes wins! If there is a tie, it’s sudden death with both players choosing a card and having to answer all eight questions on the card. The player who answers the most correctly wins! For 1 player Look at the card as above for ten seconds. Then turn the card over and answer all the questions (use a pen and paper to record the answers). If all questions are answered correctly the card is kept. If any answers are incorrect, the card has to be put back in the Brainbox. See how many cards you have after five or ten minutes.